Today, I saw a motorized scooter, a 2 person bicycle, and a limousine, all traveling right alongside each other down the road. They were all different speeds of course, so they split apart after a little bit, but for one shining moment, it was a Moment Of Strange Modes Of Transportation. That's what I was thinking of as I saw it, and it's what my wife said at the very same moment!

It was not a life-changing event.

Exciting for me: yesterday someone ordered EVERYTHING we sell except one game. That also makes them the first person ever to order Amazin' SPISPOPD on CD, so I invented the Amazin' SPISPOPD CD case. I really like it actually, but the printer didn't match the colors well - on the CD itself, they're perfect, and in fact I think it may be our best actual CD in terms of appearance - it's snazzy! But on the manual and cover, everything's kind of blued out... it's functional, but it's not nearly as pretty as it should be.

Supreme is still hovering at "just about done". The testers are finding a few little things every day. They take no time at all to fix, but it's scary to keep seeing them arrive when you think the whole thing is perfecto! Most of my time has been spent writing the editor instructions though. 82kb so far. All hand written... that means I have had to hit keys on my keyboard over 82,000 times in the process of making it. You BETTER read it! It's just my usual wordiness though... I think the new editor is a lot easier to use than the old one. Let's just hope Mark comes back with some of his amazing tutorials again when the new editor is here! I made a tutorial in the instructions, but I'm always too wordy. See? If you've read this far, you know that.

Besides Supreme, I came up with what might be the best plan for Sol Hunt yet. It's still very up in the air just what exactly it will be, but this new idea is the most original, coolest thing ever. It's also our most top secret idea ever. Before Sol Hunt happens though, there may be one or two smaller games - these huge epics can get draining, and I know you get as tired of waiting for the new releases as I do.

Speaking of new releases, there's yet another Dr. L addon that I was sent by World Tester Guy. But it's late. I'll put it up tomorrow! 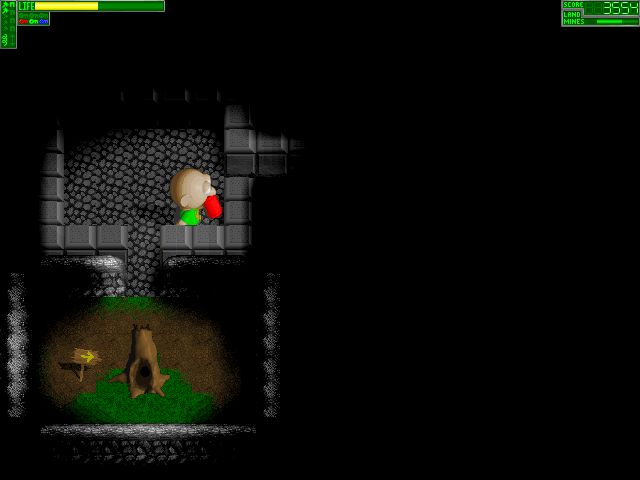 WOW EE WOW!!! I had an idea this morning, to implement smoothing of the lighting effects (actually, I had the notion years ago, but never bothered), thought about how easy it'd be... and bam, 6 hours later, here's your screenshot! This single bit of work just made the game look SO much better! I'm freaking out with joy over this. Even just the regular little wall shadows are now super-premium top notch (in fact, they also extend to the upper left now instead of just directly left) - you can just barely catch that in this screenshot, just above Bouapha. You'll have to see this stuff in action to really appreciate the beauty. I love it. I'm happy! Happy!!

Whoa, whoa, oh oh oh... oh sorry, Hamumu is currently listening to: Tenacious D!!! Fun stuff. I just invented most of the user stats that will go online, and I have to say, it's seriously cool. It calculates such intriguing stats as "Fish Factor" and "Obsession" and "Roadkill Rate". And there will be a feature set up so you can all actually compete to have the highest values for these statistics. I was just noticing a couple minutes ago that I've worked at least 12 hours today. That's something! But it's just what I felt like doing at the time... this game is very close to completion and I'm ready to get it out the door! To clarify: I personally am ready to have it done - the game itself is not ready. But it's getting there. And I can't wait!

I am tired out. It's way past my bedtime! I just upgraded the forum software, and at the same time while I was in the neighborhood, I got rid of the Editing Dr. L Worlds and Saving The World forums. I merged them into Dr. Lunatic and General Crap respectively. There were just too many forums, I was tired of scrolling the screen so much! So along with that, I discovered a minor bug in the music thing above, which I have to fix soon.

But the main thing of course is that I created the IGF install of supreme at last. I think it's ready to go, I'm just seeing what some tester types think. Anyway, fingers crossed, I wanna win! No really, I know it's not even in the ballpark of winning, but if I can hit the finals, that'll be worth a whole lot to me, with the exposure and interest. And besides, that would include a free trip to the GDC (Game Developer's Conference) next year, wherein I would get to stand around and show off my game to passersby. That sounds rather wacky. I'm so tired!! Supreme is almost done. Really! And it's good too, I played tonight. I was surprised at just how many coins you can rack up just for doing the tutorial. But I think it works out - it's just about enough to buy one world and a stick of gum.

First of all, thanks to the caller for calling back - I have now made a sale by phone! I'm a pro. Secondly, NO thanks to the guy who tried thoroughly to defraud me, repeatedly, a lot, and who is now banned for life from ever buying our products. Thirdly, I'm so happy! MOVIES FINALLY SHOW IN THE PROPER COLORS IN SUPREME!!!! Well, they were always the right colors on my computer... hence the difficulty of fixing this bug. But it's fixed! I also wrote the instruction manual for Supreme today, just for gameplay - I'm not looking forward to the horrible day I have to begin the process of cranking out the 700 miles of editor documentation. That editor is a powerful, complex machine, and there's a lot to be said about it. And to top it all off with a cherry, this very computer now has a whole gigabyte of RAM (which didn't blow up the computer when I installed it)! Let's see what happens when I try to render a 3D movie now!

Today I got to take a break and indulge in the luxury of doing dishes. That seems an odd thing to say, and it is. Doing dishes still isn't fun. But you know, it's a break from the constant work. It's a chance to not be in front of the computer for a second or two. That's kinda nice. Still a crappy job. But the best thing of all: finally we have clean dishes for the first time in weeks! With both of us on super-crunch-mode the past couple of weeks, the house has fallen into complete ruin. It'll be so relaxing when this is over, I can't even imagine.

Speaking of relaxing, I'm sitting in my brand new office chair! Wheee!!! The only downside: it's way hotter to sit in than my old skinny purple chair (this is a full on big black "manager's chair" with a back and arms and all), which is a pain in the Temecula summer. But it's comfy, and I now have back support. Nevermind that I'm currently slouched down, practically laying in the chair. 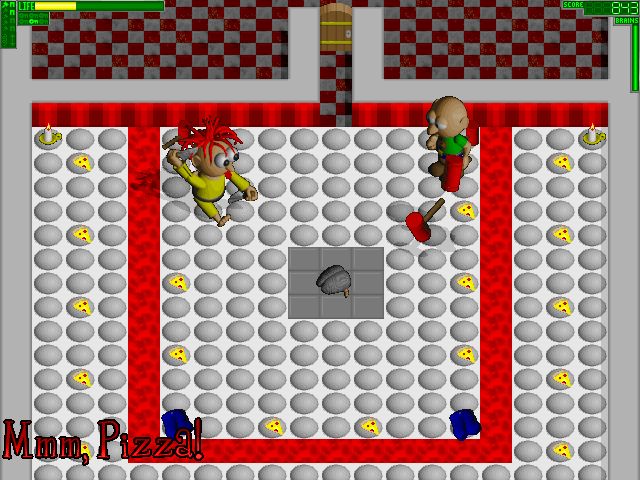 This is an ugly room. Sorry about that. It's the Rubber Room in the Crazy Asylum of Madness, and here Bouapha faces off against the deadly Mr. Crazypants. But what makes this shot so tremendously intriguing is the floor of the Rubber Room. It's rubber! If you look carefully, you'll notice Bouapha's shadow is quite a ways beneath him. That's because he's bounced high up in the air. Rubber is a new type of floor in Supreme, so far used only in this one room. There are much better uses for it though - put a spot of it in front of a river, and Bouapha can run up and use it to hop right over to the other side. I actually created it today, so that's why it's never been featured in any other levels. It's too bad, I think there's fun things to be done with it.

So furthermore, as you can see, I'm supremizing the Asylum. It's actually done now except for one more level. I've got to hurry... the contest deadline draws ever nearer. Mr. Crazypants is one of my favorite new enemies. You really have to see and hear him in action to see why.

I'm sleepy. Fixed tons of little bugs and issues in Supreme today. All last night, from about 8pm until 11:30 this morning, my computer was busily rendering a new animation for Supreme. It's one you get as a reward for something that will take you quite a while to accomplish! Just like it took the computer quite a while to make it. I ordered some more RAM today, I hope that will make future animations less sluggish. I also bought a new office chair!! I'm sad to see the purple chair go, but I'm happy to discover the wonders of back support and comfort. Also sad is the inability to fit the chair under my desk, since this one has arms, so I'm further back than before. But I slid my monitor closer, and I guess things are a-ok! I like having arms on the chair.

In other news, today I received my first attempted phone order. We get 99% online orders, a few mail orders, and very rarely phone orders. But of course, we only just started handling orders ourselves this month, so it's taken until now for someone to call up with a phone order. Well, I didn't expect it... oops... I answered the phone, "Hello?" and got a very confused customer. In the end, she decided I wasn't a legit business (or maybe she just thought I wasn't really the guy who runs the website?) and said she'd call back. Hasn't happened yet, but caller, if you're reading this, see? I TOLD you I was legit!

Ah, probably cost me an order, but it was an experience... and a learning one - I will start answering the phone properly from now on.