I could upload a screenshot of Kinyova Sr., the elderly and disapproving father of Kinyova, who you met in the original Loonyland, but I'm too lazy for that today. Instead I'll tell you that YAY, all of the non-magical skills are now implemented! Some still don't have graphics, in fact the Axe Traps are currently stone teddy bears (which look pretty cool really), but they all work. So 30 of the 40 skills are done (actually 31, since that one spell is done). They'll surely need balance tweaking later, but that's just numbers. They all work. I spent about half an hour mesmerized by wandering around demolishing teddy bear hordes with cranked up Homing, Triple, Throwing, Piercing, Poison, and Ricochet. So it's fun, I have no doubts there. Laying out Axe Traps is fun too. I also spent a long time jumping around and doing Stomps. Quite a few minutes wasted tossing Air Strike axes even. And then there's Static... oh well, no need to give it all away ("Static", not "Static Field" - I didn't rip off everything from Diablo). I just wanted to stop in and say yay. I always love leveling up and assigning skill points, so it's really fun that I've made my own.

That is all. Busy busy. Got to implement the spell selector tomorrow, then it shouldn't take long at all to go from there to having the spells in. Still no 8th spell, but I have some ideas. I'm leaning towards a general attack type spell anyway (or some variation thereof), since it's important that you be able to get by relying on magic if that's the path you choose, and attacking is kind of what you'd need to do that. Although that is kinda boring, and there already are a few ways to attack...

Ah, the weekend is here. So is the new year, or didn't you notice? Everybody does resolutions and whatnot, so here's what's happening with me for the new year:

We started on an exercise thing, as usual (though it's really just a coincidence that it's the new year - we started because Sol picked up a $1 book that had an exercise routine in it). That's going okay, we all know where it WILL go eventually, but we surely do try.

I finished reading Getting Things Done a month or so ago and semi-vowed to try implementing it. It's a system, ironically, not for getting things done, but rather for knowing what all you have to get done. You collect all the stuff in your life and keep track of it (and more importantly, decide what the very next action needed on it is), so at any given moment, you can just look in your files and see exactly what tasks could be done, were you not so lazy. It sounds pretty easy, not too pushy, and just plain useful. So I will give it a go.

Last year, I tried to read 50 books over the course of the year. I kept a nice excel spreadsheet (I keep nice excel spreadsheets of everything - there's nothing more fun than making a spreadsheet) detailing that, even rating the books. I only ended up finishing 34 books. But what I found was that I tended to avoid reading long books as much as possible, since I knew it would hurt my total. That was lame. So this year, I've tweaked it: I have the goal of reading 15,000 pages. That's 50 300-page books, using 300 pages as a reasonable average. According to the wonderful Excel, my 34 books from last year averaged 347 pages, so I'm being a little lenient, but maybe I'll make it this time! I just have to shy away from books with tremendously large pages and tiny print, I guess (I can go for words read next year, though that may be hard to track). To keep it more fun, I will share what I'm on with you and you can hear how much I hated it. For example, last year, I really hated everything by Eric Van Lustbader. He's a terrible writer.

Here are the books I rated 8/10 or higher last year:

So there you go. This year begins with Cryptonomicon, by Neal Stephenson, an 1100 page monster that would never have made the cut last year, Year's Best SF 8, edited by David G. Hartwell, yet another sci-fi short story collection, and Mastery, by George Leonard. Actually only started on the SF collection so far. I never find time to read. Just a little bit in bed. That's why when I make a schedule, I always try to work in some. Good for the brain and whatnot.

And that's about all I'm trying to do this year. I'd like to be vastly more successful in business and in life, but not really doing anything special there, other than pandering to the fans with a Loonyland sequel! I figure that's got to sell. And I may add a 3rd in the series next year. I've had an idea for the final chapter of it for years now, a huge world-changing twist to the whole story (and explaining so very much! If only you guys knew the truth!), but a pretty major thing to create. Since it is a finale, it will work fine after any number of normal Loonyland adventures. Maybe one day, we shall see Valentine Valley, or Easter Island. Maybe my turn-based game will be Loonyland Tactics. Who knows? 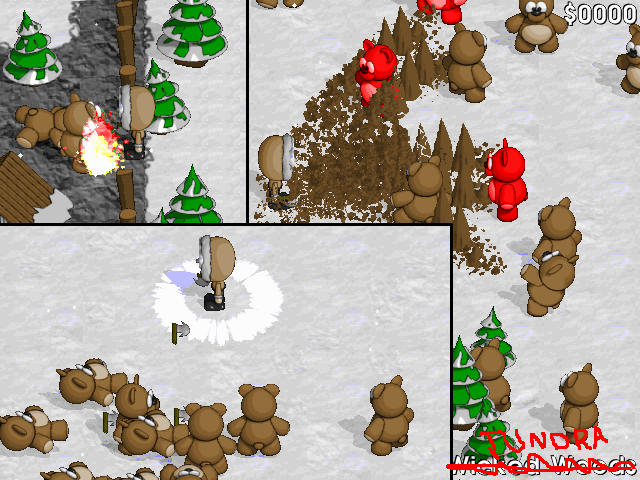 Still doing skills! Most of the day today I spent adding in graphics. Up until now I've done all the skills with no graphics at all (in fact, if you threw an axe, it would just toss a bunch of randomly cycling sprites from the original Loonyland!). But I really wanted to get the latest bunch of skills to have proper graphics so I could see how they really worked. So I made a few new graphics, all of which are represented, to some extent, in the montage above.

Upper-left is the Flame skill. It causes any successful hit with your axe to create a flame, which adds a little damage to the current guy, but more importantly, sits there for a while so other guys can step on it. Notice the one bear flat on his face. That's one of their attacks, they pounce on you like Werewolves.

Upper right is the Stone Spike spell. It's the first spell I've done. I meant it to be an attack skill (jumping and pressing jump again would slam you down to the ground, launching the spikes), but it was so powerful and interesting, I decided I'd move it to the spells instead. You probably recognize its style - Zombie Lords used to do it, and they learned it from Bjorn the Yeti. Each point in the skill adds 1 more spike at a time, so this shot is at level 6 (there's one heading straight down you can't really see).

Which left me an empty spot in the attack skills. So with a bit of thought, I decided that when you jumpjumped, you'd slam down and create a shockwave that knocks away, stuns, and damages all enemies around you. It's pretty Diabloesque, and it's called the Stomp skill. Like Stone Spike, it's way powerful. It costs a ton of Stamina to use (did I mention before that axe skills use up Stamina and magic spells use up Magic? It's true. Although the Flame skill actually costs Magic), and it's worth it. The shot of it is at level 6, and you can see how far away the victims are falling down. The ones still standing are the survivors. They're stunned. I really like how the ring looks (in action that is), but it doesn't get any bigger as you level it up, which is a bit odd. Those bears are collapsing without being touched by it.

The axes you see on the ground are actually either coins or equipment to collect. I don't know which, because currently all items are drawn as axes. That's some more graphics I haven't done. I also haven't put in the titles for the different zones, as you can see in the lower right.

Nobody guessed it! Lots of talk along the right lines, though. In Loonyland 2, things change from the 'zelda' style of collecting powerups to a much more RPG style. You gain XP from killing monsters (actually most of them are evil animated toys for plot reasons), level up, and earn Skill Points. You spend the skill points upgrading 40 different skills. You never get enough skill points to come anywhere near maxing out all of the skills (as you can see in the picture, an individual skill can go up to 10), so you really have to decide what you want to focus on. The one nod to non-RPG style is that you have to find or earn a Skill Scroll before you can put points in a skill.

In the shot, you can see how the skills look. I'm excited because I just implemented Stun, and it's fun to stun guys. I'm going through and implementing all the skills in order before doing anything else. As you can see, attacking costs Stamina, which recovers quickly, but if you upgrade your skills too much, your attacks will be very expensive. So you'll need to upgrade Endurance to counteract that. Another way to help it is to upgrade Toughness, which gives you more life, because your maximum Stamina is always your current life (so getting injured weakens your ability to attack - but upgrading Endurance lets you keep more of your Stamina as you get injured, too). So there are a lot of skills to interact with and decide on.

And by the way, in Loonyland, they celebrate Festivus, not Christmas!
< 1 Page 2/2
Copyright 2021, Hamumu Games Inc.