I'm working really hard on the 1-button ninja game now. It's still not playable, but there's a level editor (and yes, you can make your own badguys!). I've also rendered out all the animations for the ninja himself, which are a surprising number considering the whole thing is controlled with just one button. Let's hope it turns out playable and fun!

Yesterday we had a little jam session trying to come up with a name for the game. What do you think? I was setting some rules:

1. The game name can not be the name of the main character, or any other character (i.e. "Dr. Lunatic"). I'm tired of doing that.
2. It also can't be a description of him ("Tubby Ninja" for example), because then people will just end up calling him that anyway, even though it's not his name.
3. I want the name to somehow reflect the fact that it's a 1-button game, but I don't know if I'll be able to do that.

Some general areas of naming we explored were Wacky Japanese Names like "Super Happy Go Go Ninja Time", Ninja Move Names like "Single Talon Eagle Claw" (note how that cleverly implies the one button play!) or "Lotus ...something", and Kung Fu Movie Names like ... well, I can't think of one now, but a real one is "Iron Monkey". Oh, we also thought about basic video game names like what I titled this journal entry.
I do kinda like Super Happy Go Go Ninja Time, and for that matter, Ninja Havoc isn't too bad. So, do you have any ideas? Don't forget to make it ridiculous! Maybe the right thing will come to mind once it's playable and I'm playing it.

While participating in the LD48 contest, I learned of another contest! One of the themes that was in the final running for LD48 was "1 Button Games" (meaning games you control entirely with a single button, no joystick or anything), and I got really excited about that, and came up with a bunch of ideas that would work so well. That theme actually ended up coming in 2nd (3rd?), I believe, which is why we did Light & Darkness. But now it turns out that the guys at Retro Remakes are hosting a 1-button game development contest! How outrageously convenient! You get a wee bit more than 48 hours, as the final date is May 11th, and as a result, I've fleshed out my one favorite idea. I won't be using the whole timeframe (I sure hope), but a few days for sure. I believe that I can make this game good enough to sell alongside my other ones. Wouldn't that be something? A one-button game you'd pay money for? Obviously, that means more development to crank out cool levels and features to expand it beyond a super quickie. But it'll still all be 1 button. I know the idea is awesome enough to do it, it's all down to the execution now. I hope I can pull it off!

A cool thing is that the reason they are running the game is to get some games that can go up on oneswitch.org.uk, which is a site dedicated to "one-switch" games, for people who are disabled and can't operate a full-fledged game. What makes that extra funky is that it means even the game menus have to be operated with a single button. So the menus might be a little awkward. But it should be fun to play!

How can you resist the real ultimate power?!

As promised a long while back, here's what the new CD cases look like. What do you think? 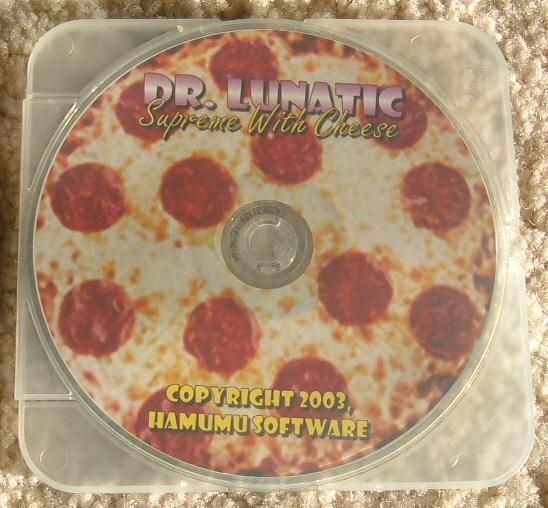 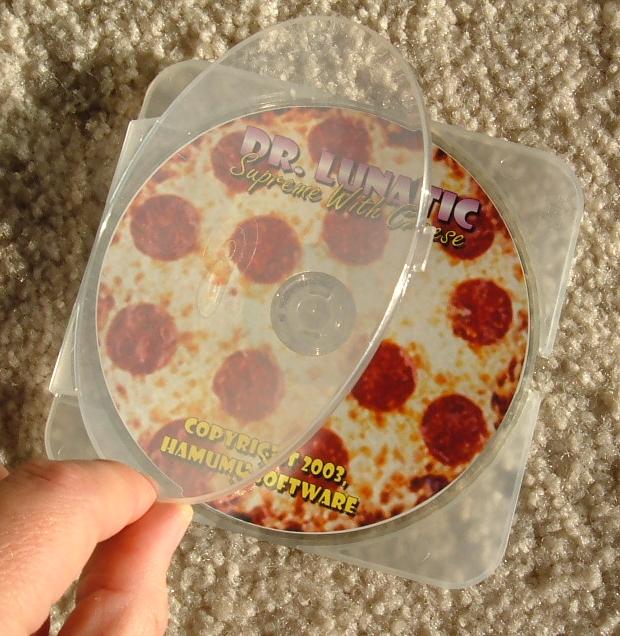 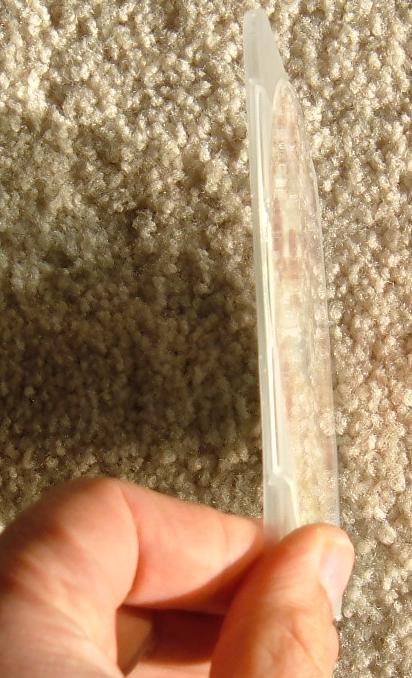 They're SKINNY! I really like them, though obviously they don't have the artistic value of the DVD cases. But they've got their own charm. And look how nicely my thumbnail is trimmed! I believe the new CD price will be about $5, plus shipping cost (somewhere around $1 in the US, maybe $1.60 for Canada and Mexico, more elsewhere). So it's going up from the former flat $5, by whatever actual shipping costs to your location happen to be.

I still have a hundred or so blank CDs and cases and all. What do you think about limited edition signed copies of the old style? Would anybody care?

PS - we're still on the old style. The new style is slowly dribbling into place.

Okay, I'm all done with room to spare. There's now even really crappy background music! But it doesn't matter how much time I had, the music wasn't going to be good. So if you'd like to try out my 48 hour game Habitat For Horror, click right here! It's 2.4mb, and it's not bad I think. I can't quite tell if it's a good game or not, so you tell me. Now it's time to relax and enjoy the half day of weekend I have left. See you tomorrow, peopleses.

Whoa, uh oh, I forgot to put up the source code! I would've been disqualified!

Well, now there are 10 levels (some of which made me feel kind of clever, and others of which pummeled me fairly mercilessly... I think this may have actual challenge and gameplay... or maybe it's just pure luck), a level select menu, help screens, winning, losing, sound effects, and who knows what else. It's really finished. So I'm thinking about adding one of several alternative dangers. My wife just came up with a really cool one, though I don't know how on earth to do the artwork for it. Here's one of the exciting new levels in action: 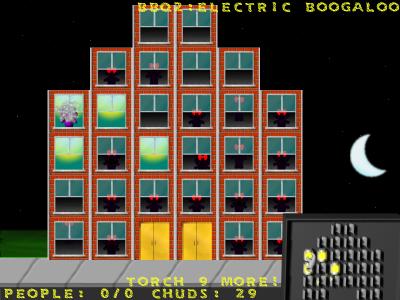 You can win! And lose! And there are sounds! And lots of fancy particle effects. Here's the latest: 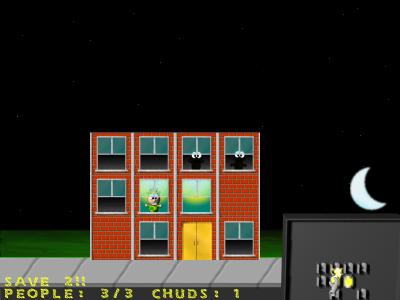 I gotta work hard, it turns out we have to go do something tomorrow at 1pm, and the contest doesn't end until 7pm, so I think those last 6 hours are completely out for me. But the game is totally there now, just need to make levels, instructions, wouldn't be too bad if I got to put in the aliens I was thinking about doing, and... well, some serious polishing would be nice too. Oh, and the main menu needs real help.

Whoohoo, now we have evil muppets chasing around, wishing to eat the currently inedible humans, but showing a big "CHOMP!" image every time they move anyway (to test that effect), and there are sparks when you place a new fuse just for fun. Best of all, if you light up a room that a monster is in, he starts to smoke, and RUNS fast out of there. If all exits are blocked, after a couple seconds, he vaporizes in a puff of smoke. Nice! Once I make my little guy edible, the first level is effectively done! Oh, and also there is now a moon that gradually sets in the background to indicate how much time is left on the level.

Hey, I've now created the monsters that will hunt my people - they look suspiciously like muppets. I haven't put any in the game yet, though. But what I have done is gotten the person to move! He now scampers from room to room, as long as they are lit. It looks very odd when he goes vertically, and if I had more than 48 hours, I'd probably have him exit through the back of the room (fade out) and come back in the other room (fade in), but I don't, so he sort of levitates or something. It's supposed to be stairs. But when he goes SIDEWAYS, oh it's a laugh riot! It's not what I intended at all, but I daresay it's just perfect. So, back to work - once I get those muppets in there, there will actually be a sort of a game!

Still going, but got sidetracked by business concerns - had to print and mail some CDs! See how getting that off my back will be good? I'll win more contests. Also ordered a pizza I will be picking up very soon.

Progress is that now there is a little guy who is looking very scared (spent way too long creating him), and when you turn the lights out in his room, he's all black except his eyes, because everybody knows that eyes glow white in the darkness. Now I need a zombie/zombie pelican/sewer monster/ghost of some kind to threaten him, but I don't even know what I want to make.

I got up this morning, got my raisin bran, and got to it. It's going great! Now there is a 'working' title screen (click to play, ESC to exit) and 'gameplay' (you can click and drag the fuses around to light the different rooms, level setups are defined in a file, and you can press ESC to go back to the menu)! Here's a screenshot combining those two things (you would not normally see them both together): 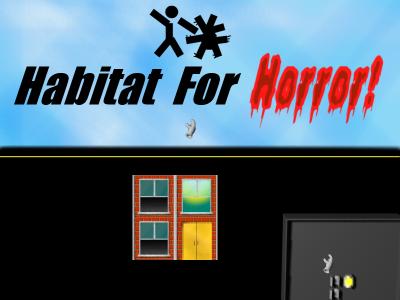 That layout is intended to be the first level. Super duper simple, one guy will be in there, all you have to do is get the fuse onto his room so he's in the light, then kick back and wait for the sun to come up in a few seconds.
Page 1/3 2 3 > >>
Copyright 2019, Hamumu Games Inc.