You know what I want to buy? An uninterruptable power supply. We keep having these teeny blackouts, maybe 1 second long. A couple a day! It's really a pain. Apparently they happen any time there is lightning anywhere within a 400 mile radius. Speaking of that, what's up with this weather? Rain and lightning in the middle of summer? Heck, rain!? At all!?! It's crazy talk. It's kinda nice except for the power troubles.

Here is my latest invention: the air replacer. It's like a gigantic fan at one end of your house, and another at the other end, and probably an assortment of smaller fans strategically arranged throughout. In the late afternoon, once it's cooled off outside and it's time to open windows and let the air in, you put away all loose papers, and kick on your air replacer. In under 30 seconds, it will have completely replaced all the air inside your house with air from outside. Shut it off, and enjoy the outside air, inside! Use it anytime you want this effect - burn something in the kitchen? Problem solved! Flies in the house? Usher them outside with great haste! Yes, the air replacer meets all your air needs. Unless you need air that's cooler or warmer than what's outside, in which case, turn on your A/C or heater.

Today, a Hamumu fan who you may know by the name of WackieWatty sent me some art of Yerfdog he's made. Here are my favorites (he made a bunch!):

I love getting that stuff. It's weird to think of people being so interested in the junk I make up. Good for the ego! But kind of trippy strange. Now if only more people would be interested and I could get rich...

Sad nature notes: it turns out we have mice around here. We found out because after all the rain, a bucket we had outside was filled with water, and today we discovered two dead mice and a dead lizard floating in it. Sad... we gotta be more careful about leaving stuff out to accumulate water. The other nature note was our second scorpion: we saw him on our walk, way far from our house, just sitting in the road. He was much bigger than the one in our garage. Not very scary anyway though. Just fun to see. Still have yet to see a single snake, except the dead little one we saw early on. I want to see snakes, I just don't want them to be rattlesnakes. Or spitting cobras, but I think we're in the clear on that one. Or, while I'm on the topic, robosnakes with laser-guided missile bays. Again, rather unlikely though.

I made the new cartoonified version of the Training Dummy for Ninja yesterday. It's much nicer - not only is it cartoony to match the new look of the game, but it also bends back like rubber when you hit it, which is a cool effect. And I added some very cool particle effects when you collect the moonshine. Today I worked on some of the interface stuff, text and life meters and all, but it is not yet ready.

Hey, get those Monthly Merge guesses in!! Tomorrow is your last chance to win fabulous prizes! (until next month)

Whew, gigantic walk this morning, a couple miles. So is that what it's like for people who really get exercise? Because it's not too bad (except the parts where we attempted jogging). And we found a rubber dolphin in the road!

For a few days we had major serious thunderstorms and crazy humidity. Another chance for me to see what life is like for others - in this case, midwesterners! The thunderstorms were fun, although the biggest raging one was during the middle of the night, and it was rather on the loud and bright side, interfering with the snooze time. Still, always fun. It started a fire actually, not too far off, but it was gone in a little while. Fire is a big danger 'round these parts, this time of year.

So, call that the nature note for today, because nothing new in the animal kingdom. Well, a bunch of neighbor dogs who bark at us whenever we go walking, but they're not terribly exotic.

So, boring journal then. Sorry! It's what you get today, since nothing happened. But on Thursday, we're going to Magic Mountain for our anniversary! Whee! 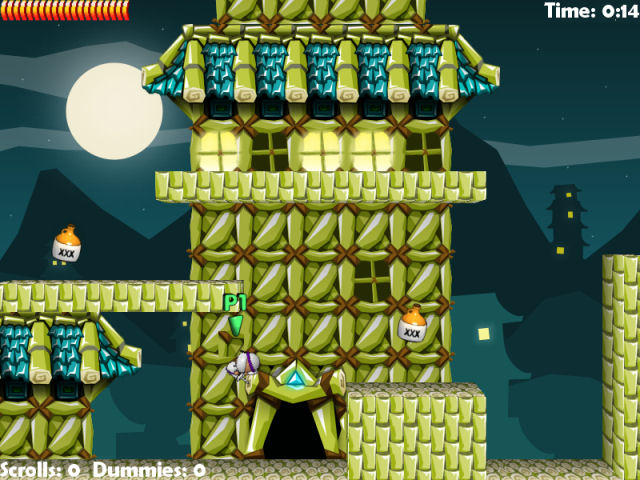 Here's the first shot that's remotely like what the final game will look like. The text and the life meter have to go, of course, and there will be more interesting stuff on the screen (like some enemies might be nice), but otherwise this is it! Oh, and you wouldn't normally get the "P1" pointer unless you're in a multiplayer mode, although it certainly is handy for showing you where the guy is in this shrunken down shot. Look, there are dancing moonshine bottles now! And they're apparently radioactive. And the ninja is now in white. I think he really looks good in-game now. In fact, it was only today that you could actually PLAY the game again, for the first time in weeks. That sounds like progress to me.

Hand-stitched by Sol Hunt herself! A little small for general use, but they sure look nice!

My latest "get stuff done quick" scheme (dating back several weeks) revolves around earning poker chips for various accomplishments on the ninja game. I can then spend these chips to play computer games or read websites. The exchange rate is frankly quite agonizing, but it's working. Or at least, in the sense that I'm not playing any games or reading any websites it is. It's not working in the sense that I'm not getting anything done. Ah, but I'm getting tidbits done... you saw the stuff in Sneak Peek. I like that stuff, it's looking pretty cool. And today I did a little stuff in the code. Anyway, I also earn a chip for each journal entry or sneak peek I do, so that encourages me. And voila, I have now earned a chip! Best of all, tomorrow is Sunday, when I get to play for FREEEEeeeeeee! Oh the playing I will do.

Took trash to the dump today. That's part of country living - you haul your own trash to the dump. It was gross. We built a compost heap recently, but this trash was started prior to that, and thus contained some grossness, which resulted in liquid in the can. Trash liquid is a gross substance.

Earthlink watch: still have not received the promised refund. Inching ever closer to the day I can contest the charge with the credit card company! Would prefer they'd actually refund it though. Once this is finally handled, I'm getting a new, much cheaper, ISP. Maybe even one that won't be PUREST EVIL. 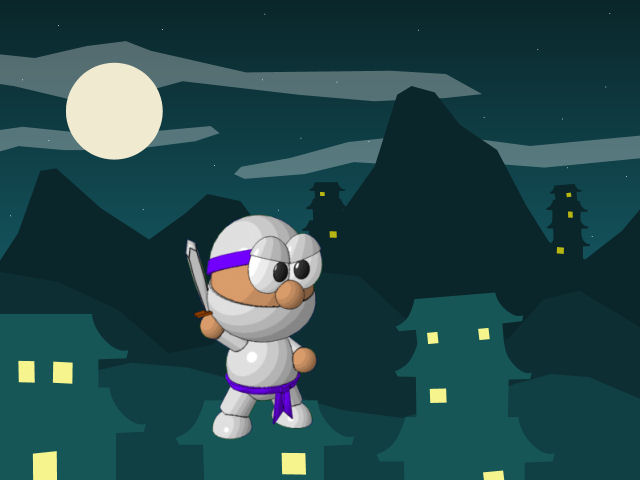 So, here's the decision! The mighty White Ninja. This is also the background for the Ninja Academy era (for the confused, Ninja Academy is the first of the time/space locations that the Time Ninja visits in Super Happy Go Go Ninja Time. it won't look anything like the old Ninja Academy, nor will it have anything in common layout-wise). And before you ask, no, he won't be this big. Looks like he's stomping these buildings though, huh?

By background, I mean this image will be behind all those tiles you saw in other sneak peeks, non-scrolling, so as to give a sense of perspective (poor man's parallax!). It replaces the smear of colors I previously had in place. 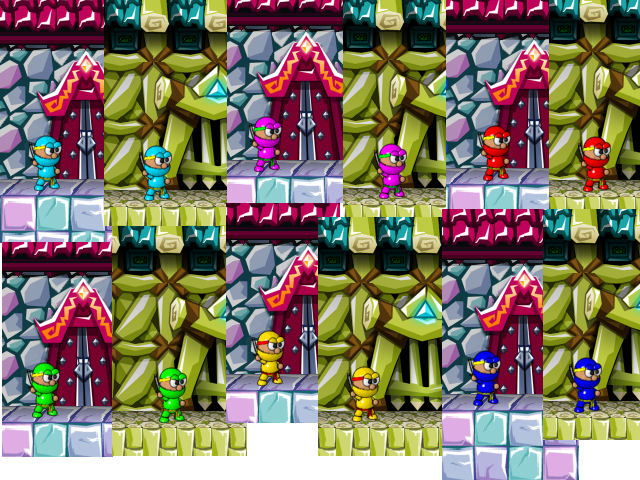 Here's a new Sneak Peek twist! I'm looking for your opinion. I needed to modify the look of the ninja so he would stand out well against these colorful backgrounds, so here are some color schemes I tried (each one shown against the two different background types that currently exist). They're quite vibrant, aren't they? What do you like? What will work well against a wide variety of backgrounds? Which ones don't seem to stand out at all?

I've been trying out different colorations of the Time Ninja to make him stand out well on the background. He's gotten pretty neon looking! Tomorrow I'll paste up some shots of different ideas and see what you think. I think I like him colorful.

Since it's hot and coherent thought is challenging, I will let you know that above my desk these days, there is a picture of a man holding a giant chicken, with a dog sitting on his (the man's) head. I'm afraid I don't know just what the picture is trying to say.

So I liked PSP9, and I bought it, and voila, my first ever delivery to the new house has occurred! PSP is great. I hope 9 turns out as great as before, but I really liked the improvements to the vector tools (and yes, the interface is notably worse than it was - simple is good, people!). Here's something else new: a new Nature Note!

Last night, Zazzy kept poking away and playing with the edge of a pillow, and I thought it was funny - it looked like she was just reacting to seeing her own foot underneath the pillow moving it around. Then a little while later, she went chasing off a little ways, and suddenly I saw it. A centipede about 4 inches long, squirming at light speed across the carpet. Yeek. It was scary! We stopped her from eating it and got set up to capture it, but it dove into the wall, squeezing in between the baseboards. It's amazing how much it could compress itself. A very creepy monster.

So I of course googled info on California centipedes, and learned that we have a house centipede. There was also a handy chart on the differences between millipedes and centipedes. It went something like this (paraphrasing slightly):

I think that's not precisely what was on the chart, but that's the gist of it - for every question (other than leg count), it came down to "Millipede: harmless, Centipede: whirling death machine". But in the end, in truth, I actually felt better after my googling - another rather harmless beast, but really the creepiest of the lot. And far and away the biggest! I had a very hard time sleeping, knowing he was lurking in the wall a couple feet away. But at least if one of the kitties munches on him, they won't die or anything.