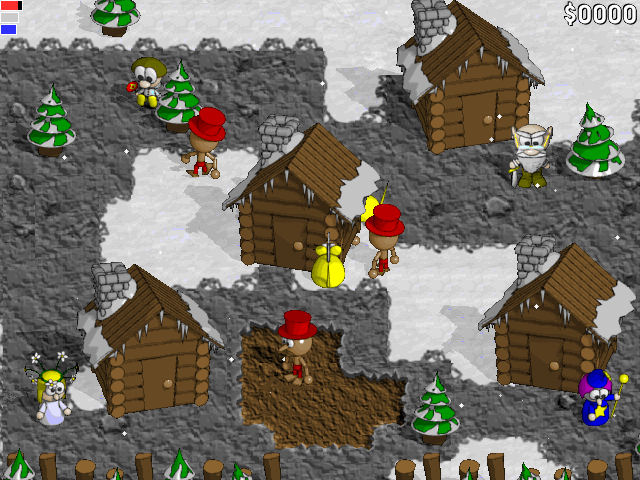 Look, in Loonyland 2, all the villagers look different! That's the kind of class this game has. Top right is Kinyova, below him is the Magicsmith (currently wiping some dust off her robe). The upper left is Bobby Joe, and below him is Healiana. Also, there's a new enemy, an evil marionette. Currently, this enemy is called "Punch Sans Judy". However, there are a few problems. It's too high-brow and cultured of a joke, and too long and unwieldy for a super basic badguy. On the plus side, it is a nice warning that their only attack is in fact to punch you. Evil puppet names are a bit tricky. Oh, and of course, someday I will kick the enemies out of town, they don't belong there.

I'm getting somewhat close to having the first "chapter" of the game done. It doesn't have chapters at all, but there are certain quests that when you complete them, you gain access to more of the world, so that's how I'm breaking up my work. Right now, I'm implementing all the early game stuff which takes place south of the river. Somehow you will get to cross that river eventually. There are a lot more quests in this game than in the first Loonyland. I think there are 14 so far, just in this first area (some will not be completable until much later though). There should be 40 or 50 when it's done. I like the idea of lots of quests, because they give you a great feeling of progress and constant reinforcement. You can always look at the list and see what you could be making progress on.

The quests are modeled after World of Warcraft in a way - I'm more concerned with having a lot of them than with them being interesting (of course, key ones are quite interesting). The idea is, you're going to spend most of your time wandering around smacking monsters anyway, so why not have there be a reward (besides the items and experience) for that? Why not have a guy say "go kill me 5 puppets", if you're going to have to wade through puppet territory anyway? That way, while you're on the way to go claim the ancient whatsit, you're not just getting there, you're smacking a puppet or two along the way, grabbing some herbs, and so on. And you don't just have the one big whatsit reward, you get a lot of lesser rewards. You get back to town and cash in 3 or 4 quests at once, hooray!
Copyright 2021, Hamumu Games Inc.