Hello folks! As usual, it has been a while since I've talked about game development and not just reviewed a terri[ble/fying] movie.

Sadly, there isn't a whole lot of progress to cover because I have been crazy busy with other parts of my life. I just don't have the time anymore to crank out games all day. Actually, one of the big limiters I have is really sad: I just can't sit at the computer as long anymore. After a couple hours, I just have to get up and move around or my body breaks to pieces. Game development is for you whippersnappers, not tired old men who should've retired in ought-six during the Great Indiepocalypse. I do actually have a desk which converts to standing, but then I'd be standing, and that sounds even more exhausting!

The work I've done of late has been pretty deep in the weeds - everything reasonably scriptable is now scriptable (not particle effects, but I'm just not gonna go that far this time!), and the game is back up and running, and I've replaced the enemy AI, which was Dr. Lunatic style (head straight for the player, if you bump into a wall, wander in a random direction for a second then try again), to where it now has a simple version of pathfinding. It looks pretty good I think, and different from any other similar game, all of which have very single-minded pathfinding - the enemies just flood at you. I still have a random element, but it's a smarter one, where it keeps looking for less stupid directions to go in.

The first mode I'm developing is as mentioned 20 Minutes Till Lunch, and I created the first boss for it. Meet The Tominato: 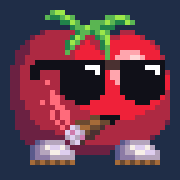 He's a very basic boss that just chases you around and tries to flop on top of you (mainly because the first boss of the game I'm parodying is even simpler than that!). He's not really a threat exactly, he just gives you more to deal with as you try to fend off the crowd of Pickles - he's got a ton of health, so you have that constant pressure of him plowing towards you as more and more guys are spawning around you.

I know I'm supposed to be making a little quickie game, and in the old days that's exactly what this would be... but I probably only work on it about 3 or 4 days a week, sometimes only for an hour. I just am overwhelmed with other stuff. But this blog is your official notice that I am still plugging away, and one day I shall finish. Realizing how close the end of 2022 is though, I think my currently listed Steam release date of "Sometime in 2022" might need an update.
Copyright 2021-2022, Hamumu Games Inc.