I've finally gotten the 3rd and (presumably) final form of progression in Broken Build Simulator implemented! There will also be some form of metaprogress (unlocking characters, modes, and weapons), but not in the sense that it will boost your character power. Just giving you access to more options to play with. The 3 progression systems I've done are all in-run progression, boosting your power as you go. I have felt like I can't really develop a full game mode until I have all the progression, because the balance will change dramatically as entire new progress systems get added. But now they're all in! I have come to the conclusion that it's good to have a combination of boring and fun progression systems. Obviously all-boring is bad, because it's boring. But I think all-interesting is also suboptimal, because it's nice to have that simple "I just got a bit stronger" feeling in addition to "I have modified my playstyle in a meaningful way and must adapt". So in that vein, let me show you the overall collection: 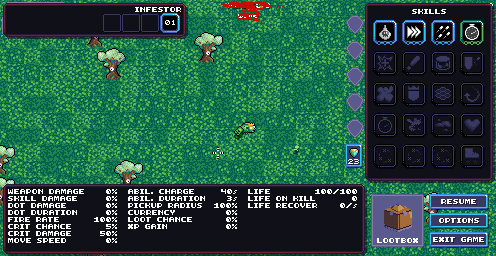 This is the pause screen in the game, where you do all your upgrading. In the upper left are your weapons (just one in this shot, but you can stack up to 5 weapons). Each one has a level ("01") and up to 8 upgrades that do interesting things. On the bottom of the screen is just a display of your overall stats. On the far right, we have your skill tree. The green icon (and all the icons directly below it) are upgrades to your Ability, which is an active thing you can use regularly. The other 3 columns are your skills, which are determined by which Hero you are playing. In this case, I'll just tease that this is The Bug Queen, and those 3 skills in the top row are Venomous, Skittering, and Sugar Rush which do things you will discover one day! Skills have a huge impact on how you play the game, but of course they are static - you can build differently on each run, but your options are always the same, unlike the random weapons and gems you get.

The important section for today's discussion is the system I just "finished" (officially, it is the boring one): the column of five empty gem slots to the left of the skill tree. That "23" beneath it is how many unidentified gems you currently hold. You get those from Champions and Bosses that you kill. If you click that button, you see something like this: 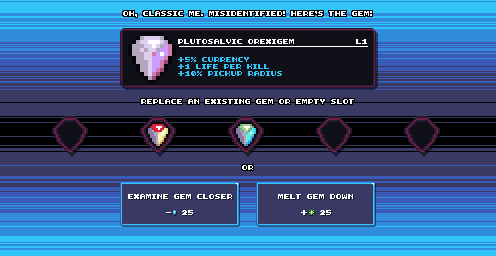 You're shown a random gem, and you have a few options for it. You can either stick it in an empty slot, or replace a gem you already have. Or you can "examine it closer" (which actually means reroll it, at increasing cost each time), or simply melt it down into Metametacurrency to spend on metaprogress. Sacrifice some potential in-game strength for future unlocks.

Gems can have 1, 2, or 3 stats on them, all of which are equally likely. Clearly, more stats are better, but there's one major problem: if you find a gem that is identical to one you already have, you can merge them together to upgrade the rank. So do you take the 3-stat gem which is definitely stronger, or the 1-stat gem which you are far more likely to find upgrades for? L10 damage bonus is huge. That feels like a semi-interesting choice, but I am having some troubles because I want to offer a lot of different stats on gems, but the more stats I add, the rarer upgrades become. I may end up having to implement a cheat like a 10% chance of getting a duplicate (of a 1-stat gem, lower chance for 2 or 3) in addition to just randomly rolling it. Anyway, it certainly hasn't been balanced or thought through very hard yet, but the basic functionality is in!
Copyright 2021-2022, Hamumu Games Inc.