Well, that was a relaxing and distracting holiday break around here. I was given dozens of new Steam games, and I enjoyed them a lot! I still am, in fact. But it did slow down development around here, as December always does. Nonetheless, things have happened! 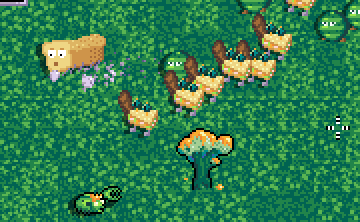 The excitement continues as lunch approaches! The second boss has been added, the mighty centipede(?) Loafy skidding to a stop from his deadly dash attack, pictured here along with an army of Club Sandwiches and the occasional Pickle. Also visible is the new foliage - sorry Eyeball Tree fans, it's lunchtime, not creepy death forest time. 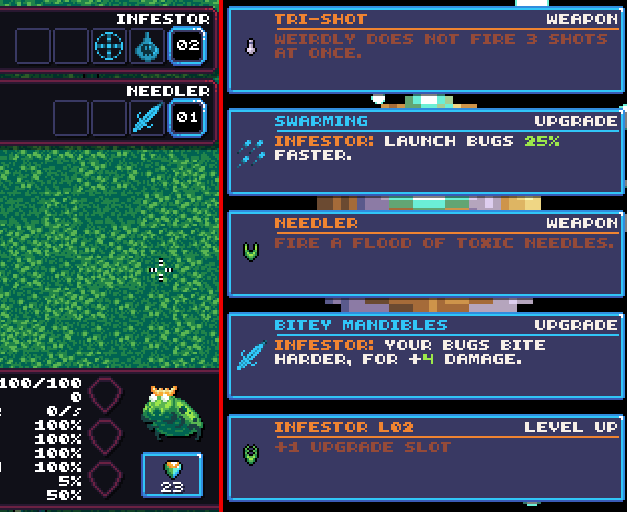 But lest we get too distracted, I did say I was going to tell you about the other progression systems in the game. So here's #2 - This is the most random one, and you should be familiar with it if you've playing Roguelites for the past few years, since they all do pretty much the same thing! When you kill enemies, you occasionally find Lootboxes. You can open those for a selection of random prizes. Currently the options in them include new weapons (you can carry up to 5), upgrades for those weapons, and level-ups for those weapons. The upgrades grant power or new features to your weapons (for instance, the Infestor shoots bugs, and one upgrade causes enemies infested by those bugs to drop eggs when they die, which hatch into more bugs). But as you can see on the Needler in the picture, there's only room for 3 upgrades. You'll have to use Level-Ups to make room for more, up to 8 maximum. Further level-ups just increase the weapon's damage, so while there aren't fun choices after those 8, you can keep getting stronger to push onward. I may change it so you don't have to get level-ups to get your upgrade slots though, as they feel pretty disappointing when you spend an entire lootbox just to get an empty slot.

So like in other roguelite arenas, you're going to want to find the weapons that synergize with each other and with your skill tree and gems, and then give them the upgrades that suit your style. The upgrades can make a big difference. One example is the Needler (which fires a burst of needles that do low damage and inflict a very long-lasting, but weak, poison): it has upgrades that drastically reduce its poison effect in exchange for much higher direct damage. But if you're playing the Bug Queen, you might want to go the other way, because her skill tree has many upgrades to damage-over-time which will make the poison very nice. She also benefits a lot from crit chance, so you might focus on that.
Copyright 2021-2022, Hamumu Games Inc.