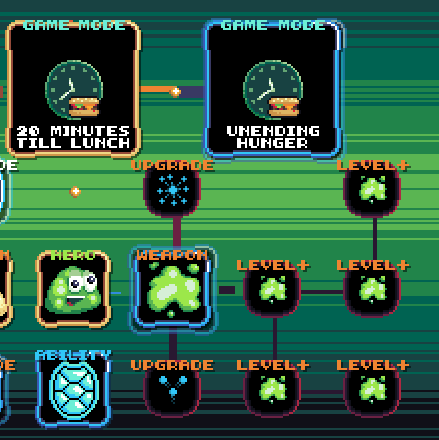 Today and yesterday has been some serious shop work in Broken Build Simulator! It looks much nicer in motion than it does here - all those weirdly shaped and broken lines between things (and the gaps where there are no lines between things!) are actually animating in a cool way.

So, as mentioned before, the game is divided up into 'packages' for want of a better term, based around parodying a specific other game. This is the 'lunch' package (a parody of 20 Minutes Till Dawn, highly recommended!). Once you buy the base game mode, you can buy 2 other modified versions of it (10 Minutes Till Lunch, which just a quicker game option; and Endless Hunger which is the traditional endless survival mode), a hero related to the mode, an ability that belongs to the hero (Shell is shown here, just because I haven't made Condiment's ability yet!), and two weapons that are also themed accordingly. In this case, that's the Globlobber (which lobs globs), and the Baguette (which wallops guys, like a real baguette). Then for each weapon, there are 2 of the weapon's upgrades which need to be unlocked (like making the globlobber's globs lob gobs). These are the generally the more exotic things, and often they come with other upgrades as well (for example, increasing how many gobs get lobbed by globs you lob, so that you are lobbing gobs of gobs). And lastly for now, we have those Level+ options. There are 5 for each weapon, and they simply start you with a higher level weapon. This is the compromise - it lets you start your weapons with all 8 upgrade slots, and any further level-ups go directly to more damage.

I'm trying to keep the metaprogress away from direct power increases, so that the game is winnable without them, but that's kind of half-and-half. It is direct power, but a little indirectly? I'm trying to lean away from power, but not avoid it entirely because I enjoy grinding it up! Anyway, we're also going to have difficulty tiers you can buy which will amp up the challenge and you're gonna need those semi-power upgrades to win them!

I'm also thinking of adding alternate skins for each hero (shouldn't Condiment be able to be Mustard or Ketchup?), which wouldn't be a ton of work, but we'll see once I have more important stuff done.

I'm also unsure what exactly you should start the game with... I think I may have to pick one of the parodies to be the one you start with, and that sounds painful. I'm considering just using a tutorial which gives you enough cash to buy your first game mode, but then that brings other questions - what kind of boring hero should you play in a tutorial before you unlock anything fun and flavorful? A Toot Oriole? Kingdom of Loathing invented it first, I'm afraid. And then am I going to have 5 boring themeless weapons available before any modes? You do kind of need some extra weapons to fill out your roster, but I'd like them to be fun... all these early game questions trouble my mind.
Copyright 2021-2022, Hamumu Games Inc.