Okay, I finished! It's been 25 hours since I technically started, but for several reasons I think I wasn't cheating. So here is what the finished game looks like on a high level when things are crazy:

I changed the rules around a bit after that, so I don't know if it's even possible to get that far anymore. I think so though. Balance on this game is very questionable and haphazard. But I have fun playing it! I will put it up on the gamelets page in a little bit when I have it packaged up.

According to not cheating, I have 2 hours left, although the rules said either a single 24 hour block, or 12 hours broken up. I haven't timed anything, but I am quite sure I'm not even close to 12 hours of work yet - I gave up VERY early last night and watched movies, due to cranial agony. So...

Now there are Missile Commanders, and Cryotanks. You can't see the tanks here, but that's okay because they don't do anything yet. But the red squares are the explosions from the missiles. It also now has levels, which go in a sequence - normal, boss (way less guys with way more health), speed (weaker guys that move fast), and horde (lots more guys with less health), and back again. Obviously getting progressively tougher along the way. The balance is completely random at this point, but I'm enjoying it anyway. The missiles are odd - they home in on the center of mass of enemies. So if you just have guys left on either end, you can end up with missiles spinning around aimlessly in the middle. The white box in the pic is a missile. Oh, and you can see the highlight here - the missile station that's blue-ishy is currently selected.

And now your turrets do shoot, and slay the evil invaders, and you can upgrade them! Right now the screen is displaying my upgrade options for one of the turrets. Oops, forget to add a selector box so you know which one! There's no way to get more money yet, which really limits your capabilities in that regard. The invaders get redder as they get hurt more. You can also sell turrets for half the money put into them (the wrench - a $ would be text!). Strategy tip: You really need turrets at the far left or right end (preferably both) due to the way space invaders operate. Think about it!

Now you can purchase and place the Blaster turrets or whatever they're called. The turret to be placed is red because it's currently in a place where one can't fit (overlapping another). Notice how your money is represented by a meter (the blue-grey meter on the left), and your lives by a bunch of stick figures - with the theme of "anti text", I am not putting in ANY text, or even numbers. That will make displaying a score at the end an interesting experience. I should really get these turrets shooting.

So far I've had an extended walk around the property and watched an episode of Buffy, so it's not the most productive. But this is going very easily so far!

I tried the new version of PTK, which has been an effort to get started, as new libs always are. But now I have a black screen you can hit ESC to exit, and a dancing invader on it:

The game idea is simple but unique: It's a Tower Defense game - you place defenses with limited money and hope it's enough to hold off the invading horde. The twist is that it's Space Invaders - you place your 'towers' on the ground at the bottom, and the invaders invade down in the typical pattern we all know and love. There are 3 towers planned: Blaster (the standard Space Invaders ship, which doesn't move), Missile Commander (a missile launcher from the game Missile Command, fires off missiles that explode a circle), and Cryolaser Tank (based on an obscure game called Laser Blast, I think, for the Atari 2600 - a tank that fires a beam which hurts and freezes all invaders in its path). I'd like to also add a Moon Patrol tank, but that's probably too much for 24hrs (as if the rest isn't). You place these things (oh, and Mines to mine moon minerals for cash), and upgrade them. Simple as that!

This weekend is a special mini warm-up event for the Ludum Dare 48-hour contests. I guess the next actual one is tentatively set for April sometime. But the warm-up is a 24-hour event instead. You pick any contiguous 24-hour block this weekend, and get to it! The theme is two-fold: "Anti-text" and "Moon". Yes, those are weird. The first one gets less weird, and the second gets weirder. The first was originally proposed as "Anti-text: make a game with no text in it" - simple enough, and kind of an intriguing challenge (not much of a theme, but an interesting thing to think about while working on another theme - I'm going to see about not using any numbers either, since those are really text). Moon, on the other hand, was originally proposed as "But even if you doubt their overwhelming findings, the Moon will never be the same to you again. Never will you raise your eyes to look at her without wondering: IS IT OR ISN'T IT AN ALIEN SPACESHIP WORLD?" Now that is a bit much for me... I'm just going to interpret it as simply "Moon".

I will go give this some thought whilst I lay in bed.

As you probably know, I do game reviews. I'm one of the panelists at GameTunnel's Monthly Roundup. This month, a game called Galcon came up. It's an update to a 48-hour contest entry, so when I was in the chatroom for that contest, I mentioned that I would be reviewing this game. The author, Phil Hassey, seemed interested in receiving a good score. I pointed out that receiving a Wii would result in an instant 10 from me (of course, the downside being that I am just one of four scores he'll receive). I forgot about that after a week or two, but then yesterday, I walked into the post office to find a package waiting for me when I didn't expect one. And what was in the package?

And it doesn't stop there! The package contained an entire Wii bundle (since, as you know if you tried to get one, it's impossible to get a Wii non-bundled at this point in time): 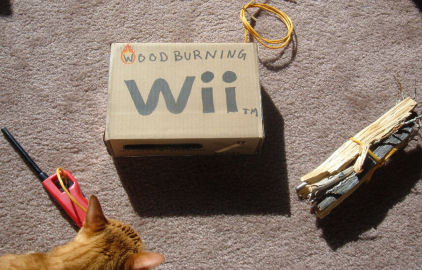 It included fuel and even an Activation Device. I didn't notice any controllers or games, though. For that matter, the only slot on the system appears to be the Wood Receptacle, which makes me question whether I can even put a game in at all. And you know what's great about the Wii? It's not some hardcore gamer console - it's fun for the whole family! 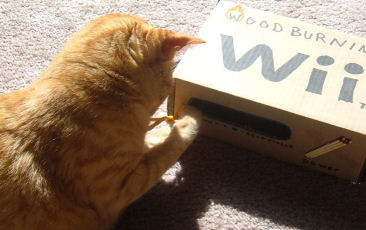 So yes, I have been bribed. I suppose it's a bit public at this point, which may impact my integrity. But you watch the upcoming round-up. Thanks Phil, that ten's on the way.

Incidentally, just about 20 minutes ago, I got an electricity-burning Wii! Well, I ordered one. And yes, it was a bundle. If you are in the dire straits that I've been in, searching for that elusive entertainment device, might I recommend what got me mine: NowInStock. It took a few weeks, but their email alert hooked me up in time at last. I swallowed my pride and bought from... Walmart. Glurk. They do have a pretty cool bundle though - you get to pick which 6 games you get, and it's not even that much overpriced. Sadly, no extra controllers or anything, but 6 games of my choosing is nice. It's even a good list - I found 7 I was at least somewhat interested in, not counting Zelda which I already have (a rather frustrating Christmas gift)! Now to wait in breathless anticipation, only with breath, since it'll probably take a couple weeks and I don't want to be dead when it gets here.

I like to promote Hamumu as a company that really pays attention to the fans and helps you out immediately and thoroughly and all that stuff. We sure are much better than any "big" company, by a margin so wide you can yell things across it and they echo. Or are we...?

I am very impressed with ArenaNet, the makers of Guild Wars! They totally beat me this year by sending out Thank You cards by mail, hand-signed by the development team, to 1000 people that they recognized from online forums as having been real supporters of the game. That is so cool, and think how exciting it would be to get one of those! That is definitely fan service, and not in the anime sense.

The closest I came to that this year was backwards - Isparklesalot (a member of our forum) sent me a Christmas card! Thank you! Now I know how exciting it is to get one of those!

So, now it is 2007. I guess I need some goals. My only goal last year was to read 15,000 pages. I got pretty close, but I was 1,500 short by the end. I just get very busy and have trouble finding time to read. I always mean to do it in bed, but by the time I go to bed, I'm tired! So my solution this year is to not set a reading goal. If there are interesting things to read, I shall read them because they compel me to. It's not like I don't get enough brain exercise with the thousands of words I read every day on the computer just doing my job! So, forget reading. What else?

Exercise, we'll throw that in there. But you don't need to hear about it. Very necessary though! How about business stuff? That's what you want to know about! I will finish LL2. My goal is to release it for real by the end of January. Then the Collector's Edition done by the end of February (but maybe not released, I'll need to get the CD production done and all). That leaves 10 months to make another game. Sounds pretty reasonable. So let's say one more game released in 2007.

I decided a while back just how I would do the next game. A fun experiment: design it all on paper first, and then I am not allowed to stray from the design at all. Not that I can't do anything else (like a monster or item idea that comes up), but all the crazy extra modes and bonus features I always throw on at the end really drag out development. None of that - I have to come up with all the crazy modes in advance! No, I will actually try to keep it focused. You know how much extraneous LL2 there was? All 3 'crafting' things, achievements and modifiers, artifacts, talents (that was a doozy!), the split path of the game (so twice as much middle game to make), and I can't think of any more, but there's more. If you conservatively call that 1 month per thing in that list, that's 5 months! So we'll see how this experiment goes. I'll probably just front-load that phase and have a list of fifty different game modes to make.

So, those are modest goals. I think they can be achieved with ease as long as I continue to resist buying WoW. But resolve weakens on that front every day...
Copyright 2021-2022, Hamumu Games Inc.