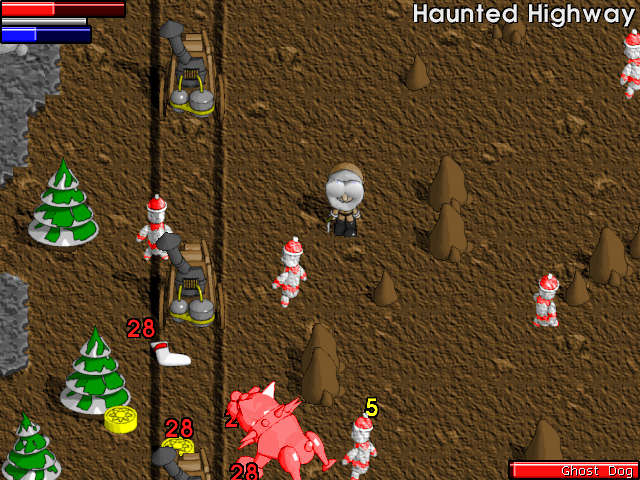 Pardon the JPEGginess of this picture, but with all that bumpy stuff on the ground, it was a huge file otherwise.

This is of course the Haunted Highway, where you are beseiged by Ghost Dogs and Ghost Monkeys. Interestingly, despite being ghosts, they can be hit by the steam-powered caravans driving through. It's fun to lure them into getting run over - that 28 damage is almost enough to finish them off in one hit. It's also enough to kill you in about 3 hits, so dodging traffic is a priority. Also in this shot we see a sock dropped by one of the monkeys (they're sock monkeys, or were before they became ghosts, I suppose), and that's about all that's new and exciting to tell you here.

I'm in the midst of writing the dramatic showdown for one of the two sides you can play. There's intrigue, conspiracy, secrets, and ancient prophecies! What more could you want? Crime? We've got that. Backstabbing? In. Highway robbery? That's even the name of a quest! Black market arms dealers? Done. Funny outfits? To a T! A surprise appearance? Check. An in-joke that only members of my immediate family will ever get? Complete. It's the best Hamumu plot ever. That's not saying much.

It'll be nice when the sides come together again and I don't have to do everything twice. I've also finished the last of the maps for the first part of the game. It's looking good! I've even made dozens of the million missing sound effects.
Copyright 2021-2022, Hamumu Games Inc.